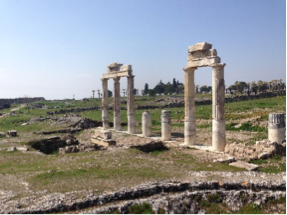 The name of this natural site, located in Denizli, a city in southwestern Turkey, translates to “cotton castle.” The area is famous for its natural hot spring water, which cascades down inclines to various tiers, building turquoise-colored pools as it moves. The water leaves behind a carbonate mineral, creating hardened, white salty plains. Unfortunately, many of the magnificent terraces are currently off-limits—having suffered erosion and water pollution—but visitors can still walk down the slope and explore the pools.

Just above these thermal salt pools is the ancient city of Hierapolis—a development dating back to the 3rd century BC. Visitors can swim in the Antique Pools, which is littered with marble columns from the Roman Temple of Apollo. Originally a fortified military colony, the city enjoyed great prosperity when the hot springs became a popular spa center.

Unlike other ancient cities around the world, Hierapolis feels more like an exploratory walk than a museum. It stretches several kilometers in length with large features dotted throughout—the Hadrian Theater, one of the largest remaining ancient amphitheaters, the Frontinus Gate, and the Nymphaeum. A visit to Pamukkale and Hierapolis is a great addition to any western or southwester Anatolian trip. The ancient city of Ephesus is just a three-hour drive away.